You are here: Home / Tasmania / And the nomination goes to…

Sweet dancing jehovah, I’ve been nominated (bonus points if you can tell me from which TV series that paraphrased exclamation came from, who uttered it, and what episode).  Lynelle over at 90s Popcorn has generously nominated me for a Liebster Award, more of which you can read about here (and in true Tasmanian form, here’s my connection with Lynelle – we went to the same all girls high school).  Basically the Liebster is an internet based award, presented to bloggers by bloggers, to give recognition to new and upcoming blogs, of which yours truly is categorised most firmly.  As part of the deal however, I have to answer a few questions that Lynelle has provided.  Without further ado:

Why did you pick the topic that you blog about?

When I first moved to Tasmania 20 years ago, the state wasn’t a place that you would stay in to further your life opportunities or career.  During high school and college it was almost a given that at some point you would try to leave and move interstate for university, and probably relocate to the mainland altogether; Tasmania was the place you would eventually return to for retirement.  Thanks to the Great Gatsby-esque efforts of David Walsh and his opening of the Museum of Old and New Art (MONA) though, Tasmania has slowly become quite the vogue place to be.  An evolution in the gourmet scene (wonderfully exampled here) and incidental entrepreneurs looking to utilise their surroundings the best they can (as in here) have also increased the state’s lifestyle profile.  Tasmania, for all its economic and infrastructural shortcomings, is a pretty brilliant place to live in.  I, very unoriginally, wanted to write about the lifestyle we have down here, show case the state, promote it in a much more personal and intimate way, and ‘highly suggest’ things that readers can eat, purchase, and experience to enrich their lives (and perhaps try to emotionally blackmail a few ex-pats back to the state!)

What is your favourite sound?

Probably a very strong, bowel trembling bass, whether that be through the human voice or electronically as in RnB or Hiphop.  I remember when I was living in Japan I attended a charity party night organised by our prefecture.  At the venue was an enormous subwoofer, nearly as tall as me (so a decent 5′) and as I stood next to it while it blared bass heavy electronic music (specifically Dragonette’s I Get Around, I think) I could do nothing by smile like a maniac while the frequency travelled through my insides.  This, this and this also make me swoon.

What was the last thing you ate?

I went on a proper dinner cookout and roasted baby farm tomatoes, onions in balsamic vinegar, savoury kale, and served with steak and some store bought potato salad.  Afterwards the movie I was watching was so boring, the husband recommended I do a chip and chocolate run to the supermarket because the added calories would help me work through the remainder of the movie.  I did and he was right.

Getting up early and on time, sticking to a my schedule, ticking off the to-do tasks for the day, feeding myself appropriate food, making dinner on time, and feeling so exhausted at the end that as soon as my head hits the pillow, I am out.  As an incredibly efficient procrastinator, any day where I stick to schedule and actually achieve anything is a perfect day.

What was the funniest thing that happened to you this week?

Since I started working from home, I sadly don’t get to interact with colleagues on a regular basis anymore, so there are no more workplace funnies.  Most of my laughs come from the antics of our pet birds, more often than not from our biggest of the bunch, Turtle, a short billed corella (pictured below).  He does talk, and his ability to pick up on words, tone,  my voice pitch, and then repeat them ad nauseam is very, very scary.  I am on a mission to teach him the sounds of R2D2 like this champion. 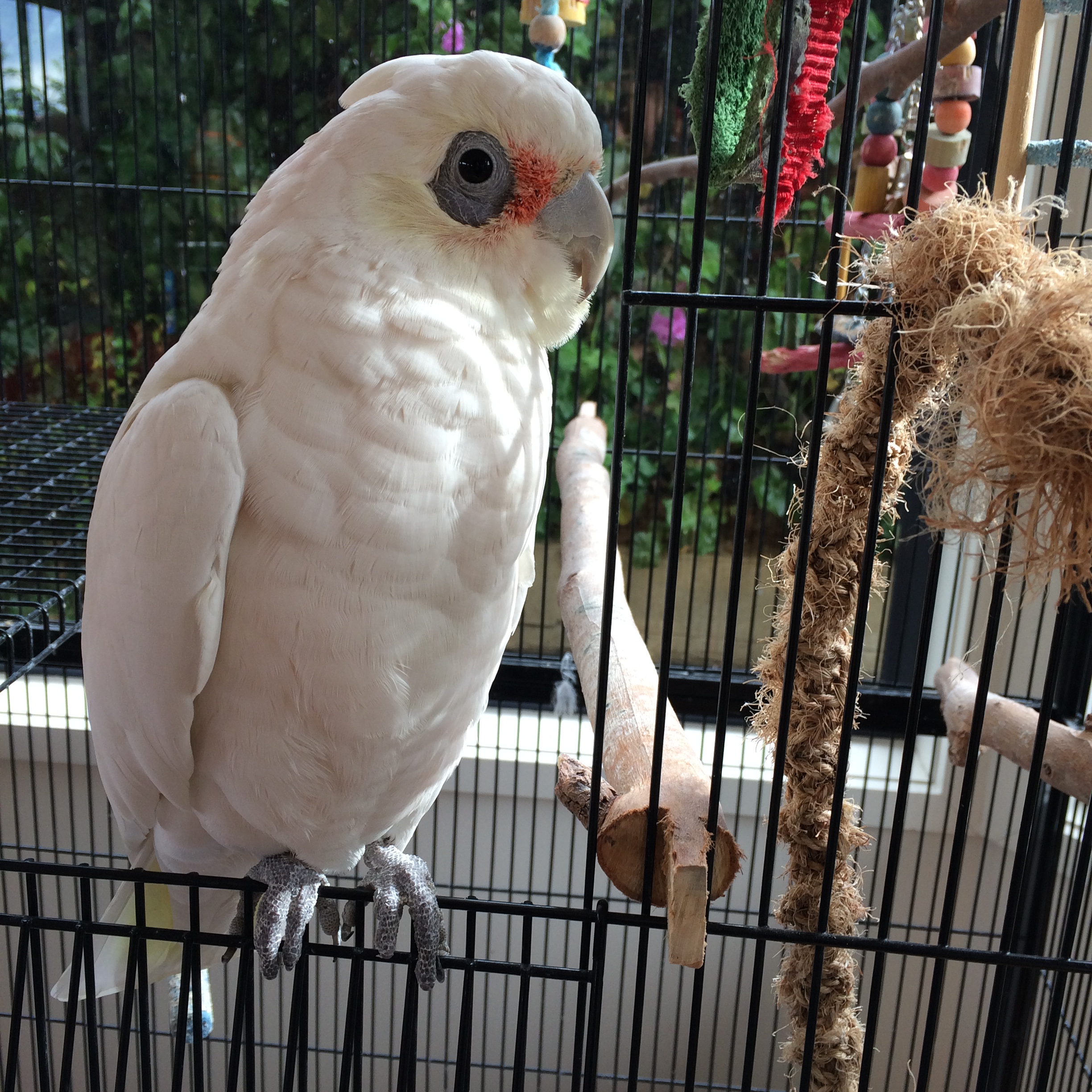 Five words that sum you up

What is your favourite animal?

Now that I’m a bird owner, I have a firm soft spot for anything of the avian variety.  Growing up we had dogs and I will always love a goofy face with a snuffly muzzle, but there is a certain personality within birds that most people do not fully appreciate unless they own one.

What is your favourite book and why?

I have two eternal favourites – Bridget Jones’ Diary by Helen Fielding, and the Secret Garden by Frances Hodgson Burnett.  If music is the soundtrack to your life, then Bridget Jones was my script.  As a college student, I firmly adopted her singleton mantra of being a poised and cool ice-queen, mostly because I thought it was cool and people would think i was really with it.  I have no street cred though.  I’m what they call a banana – yellow on the outside, white on the inside – and having an Asian parent meant I had as much structure in my life as Bridget lacked.  I lived vicariously through her bumbling but endearing diary entries, and dreamt about the eventual young adult life I would have once I flew the nest.

The Secret Garden was my first introduction to Victorian era literature; my godmother gifted me the 1993 movie adaptation directed by Agnieszka Holland as a child, and I became fixated by the opening scene of Kate Maberly’s Mary Lennox being dressed by her Indian amah.  I got my first celebrity crush on Andrew Knott, who played Dickon, developed a knack for imitating accents thanks to Martha’s dialogue with Mary here, and finally when I was old enough to actually read the book, fell in love with the story all over again.  There is something about the story that deeply satisfies my British side.

Have you ever had an awkward spelling error (in a text, or at work for example?)

Quite recently actually, in a messenger conversation with a movie/nerd friend, but the typo absolutely contributed towards the general tone of the conversation.  I had just finished viewing a youtube video on how Episode 1 of Star Wars could have been made so much better (the pain is real, friends).  At the end, the host of the video read some fan fiction for fun, which turned out to be surprisingly suggestive and horribly awkward.  I was discussing the video with him and mentioned the fan fiction.  Let’s watch:

Me:  And the fan fiction at the end was terrible!  Basically 50 Shades but translated into Star Wars – Chewie handles Luke’s lightsaber.  Puke.

Friend:  from the hints you have given either word might be appropriate :p

My childhood heroes were (and still are) hyper masculine, very badass, sometimes quite violent, but who ultimately fought for good.  Peter Weller’s Robocop, Schwarzenegger’s Conan the Barbarian, Dolph Lundgren’s He-Man, along with Transformers, The Real Ghostbusters, Voltron: Defender of the Universe, Teenage Mutant Ninja Turtles, Swamp Thing etc.  While I couldn’t name a favourite character, probably the one I recall most vividly was Peter Cullen’s voice as Optimus Prime.  To that end I actually got myself a tattoo of the Autobot’s badge, because in my mind, the Autobots always stood for no-strings-attached good.  And that’s always something we could do with more in our lives. 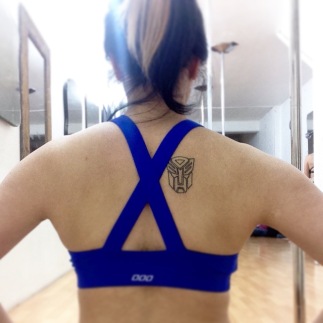 Say hello to my little friend

Ah, the 90s.  At the time I thought society couldn’t get more sophisticated than that, and while I’m glad we’ve moved on from Christian classics like Three Pockets on my Overalls, I still love 90s and early 2000s pop.  There are way too many to pick one specific favourite, but Say You’ll Be There by the Spice Girls is an accurate example of a song that immediately reduces me to pre-teen squeals and has me recalling early morning sessions watching RAGE, lip syncing in the glow of the TV in the predawn light, wrapped in a duvet.  Girl Power!

Now, the last part of this is for me to nominate 3 more new blogs for you to check out and continue the nomination.  Since entering the blogging world, I’ve been trying to get myself familiar with like-minded locals, which is actually a struggle for me as I’m quite the introvert.  However, here are two, plus one for fun:

Evie and Ginger  – Evie is a health food nut, mother, writer, journalist, part owner of the cafe Ginger Brown in South Hobart, and creator of delicious things.  Evie and Ginger is where she indulges her sweet tooth and shares delectable recipes (and beautiful accompanying photos) on her creations, all of which the ingredients are naturally sourced, refined sugar free, gluten and vegan friendly.  Locations where her goodies are stocked include Ginger Brown, The Tasmanian Juice Press in Argyle Street, and most recently at the Hill Street Grocer.  [Side note: I’ll be interviewing Evie in the coming weeks, so stay tuned for that chat!]

The Island Gatherings – this place is less blog as opposed to brilliant skill enhancing opportunity, run by Rebecca Wiggins and Dearna Bond, but is still a wonderful concept to get involved in.  Basically Rebecca and Dearna host workshops, carefully curated ones that focus on design, styling, and lifestyle – food styling, lifestyle photography, parent and children bonding sessions over painting or craft projects.  All those little things that bring small joys to an individual’s life.  If you’re looking for something different to do that focuses on people and enhancing your artistic skill set, check them out and sign up.

The Royal Order of Sartorial Splendor – I am a huge genealogy nerd, and there are no easier to access family trees to trace than ones from the monarchies of the world.  This particular website indulges both my fascination for the western royal houses and my girlish love for couture fashion.  It’s written in “purely frivolous and perfectly harmless snark and admiration of all things stylish and royal”, in addition covering crown jewels, the meaning of sashes and royal orders, tiaras, and excellent write ups on royal weddings both modern and historic.  Judge me, I don’t care, but don’t come begging me to save the team at a quiz night that centers on royal history, if you do!